The Queens Museum of Art has many amazing pieces of art, including some great paintings that could easily be interpreted and understood. Both paintings that I chose to write about have many the visual elements learned in class. 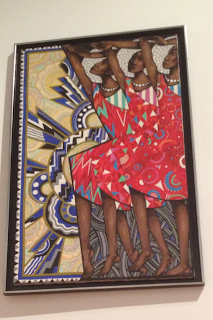 One of the first paintings that caught my attention is of the three ladies dancing. This painting shows the repetition of the same outfits, as well as the same stance. The artist emphasizes on the three ladies. There is a variety of colors, but the painting consists mostly of a variation of reds and blues(primary colors). There are different patterns throughout the painting. Some of the patterns are on the dresses, the necklaces, and some are in the negative space. The patterns are formed by the many organic and geometric shapes. This painting creates unity by showing the three ladies dancing together. It looks like they are doing a synchronized dance, and they look like they are all wearing one dress connected at the waist.  Not only it implies movement from the dancing , but also from the "busyness"in the negative space. Visual rhythm could be noticed as well. The diagonal lines to the left of the painting and the lines on the bottom (where the feet are) imply movement. 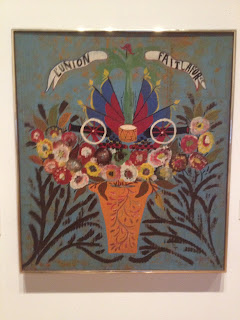 Similar but yet so different, the painting of the vase of flowers with tree branches around was once a country's flag. It was Haiti's National flag from 1894 to 1948. The artist of this painting is Hector Hyppolite. The painting is oil on cardboard and then mounted on wood. Just like the painting of the three ladies dancing, Hector Hyppolite uses primary colors. The variety of different flower colors brings unity within the vase. There is repetition of the same flower but with different values of yellow and red. We can also see the approximate symmetry in the painting. Even though it wouldn't be exactly the same if we folded the painting in half, on the first look it would be a mirror image. The artist also includes pattern within the painting especially towards the top of the painting. It looks like there are six wings opened up (blue/red). The other pattern is of the tree branches and the vase. As we notice in the writing of the painting, it mentions the word "unity" or "union." The emphasis in this painting is on the vase filled with flowers.

Both artists use primary colors and unity, as well as different patterns to show the viewer an insight of the culture. Out of the many paintings found in the Queens Museum of Art, these two paintings seem to be very similar and have a lot in common. The unity expressed by both artists gave me an idea of how people are in the countries depicted.

Posted by Antonio Mazilu at 5:33 AM