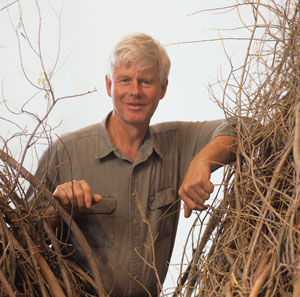 The artist I picked is Patrick Dougherty, a sculptor who weaves tree saplings into whirling, animated shapes that resemble tumbleweeds. He was born in Oklahoma in 1945 and was raised in North Carolina. He earned his B.A. in English from the University of North Carolina in 1967 and his M.A. in Hospital and Health Administration from the University of Iowa in 1969. At the age of 28 he was in the Air Force working in hospital and health administration when he bought a 10-acre farm, because as he said, he was a log-cabin type of person. His dream was to build a house. So he researched in books and practiced dovetails until he was perfect and started his fist artwork, which was his house. It wasn’t until later that he found out his real dream was to be a sculptor. 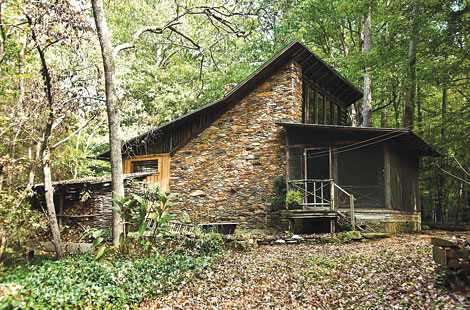 He built it from old barn timber, fallen trees and rocks that he dug from the ground. Except for his house, all of his works are site-specific installations that are temporary, usually lasting for a year or two. I came to know about Dougherty when my group was assigned installation and we had to google artists. I found him and I loved his work mainly because he uses nature as his tool. He says that building his own house for him was a passage, finding his way through a house and into his life. It was his real quest. At the age of 36 he went back to school straight into the graduate art program at the University of North Carolina. That’s when he made his fist stick work, a man-size tangle of sticks made on a picnic table at home. Since then, he has made over 200 pieces for sites all over the world: gigantic snares, nests and cocoons, some woven into groves of trees, other lashed around buildings. Mr. Dougherty is married to his second wife Linda Johnson Dougherty, chief curator of the North Carolina Museum of Art, for 18 years now and they have a 16-year-old son. Him and his fist wife divorced in 1985; their children now are 40 and 33. 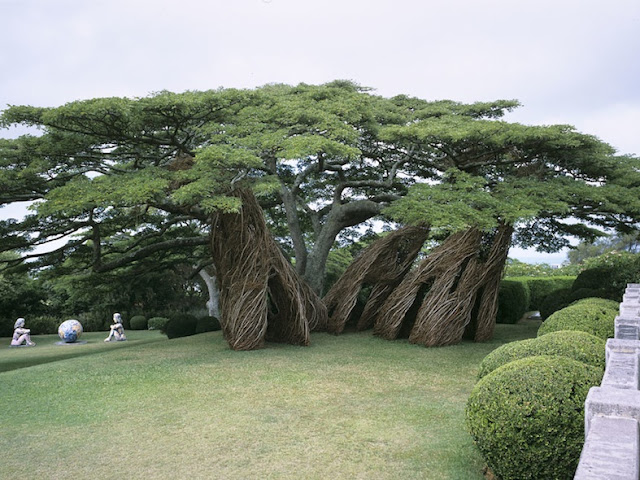 The Na Hale ‘Eo Waiawi is a complex of bee-hive-like structure in and around the monkeypod tree that graces the grounds at the Contemporary Museum in Honolulu, Hawaii. He utilized strawberry, guava and rose apple saplings harvested from Ho'omaluhia Botanical Gardens in nearby Kane'ohe. He arranged them crooked and used the rule of odds in order to make his work more interesting. In my opinion he fixed them so the leaves of the tree would look as they were part of his work and placed the twigs in such a way as if his work is alive and growing. It looks like a not so conventional growing tree house with windows and doors. This 3D work has for focal point the “house” on the left and it makes your eyes move to the “house” on the right than to the one in the center. It has a rough actual texture and the repetition of sticks together give his work a nice rhythm. Daugherty uses twigs around a tree to create unity and although the scale of his work looks big, it is in perfect proportion to a tree and a house in height, but maybe not in length. 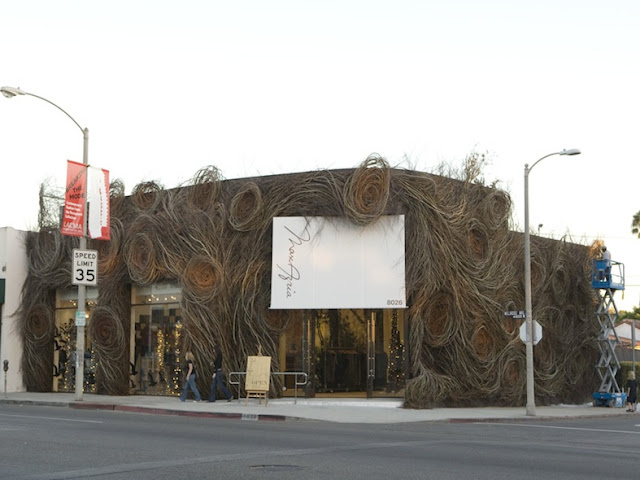 Just for Looks was made in 2006 on the outside walls of Max Azria Boutique in LA.  In this non-representational installation he uses 2 hues of brown to paint the inside of the circles. It has a pattern and a nice rhythm created by the repetition of sticks and circles, which also gives his work unity. Variety is presented by the place chosen for the installation mixing natural twigs with the man-made building. I believe the focal point of this artwork is purposely the white rectangle at the front of the store to attract customers, so they could associate the “awesomeness” of Dougherty’s work with the name of the store making them want to go inside and check if the clothes are as cool as the outside artwork.

Just around the corner 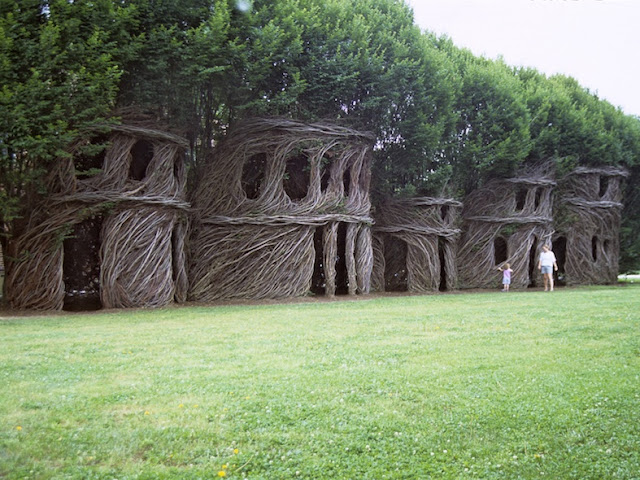 This beautiful artwork was made in the historic town of New Harmony, Indiana in 2003. The way the saplings are placed it feels almost as if the wind helped him arrange it or even like it was brushed to perfection. That gives it a pattern and a rhythm. The repetition of houses gives this installation unity and the different scales variety. Just around the corner is very similar to Na Hale ‘Eo Waiawi yet much more complex. It resembles much more a house and has for ceilings the leaves of the trees. It also gives me the feeling of a growing tree house and what I love about this work is again nature. When I look at it it makes my imagination go wild. I believe my impression would change if I was to look at it live but I can’t help but think about this being 5 tree houses of families that live in the forest close to a long river full of wild animals, such as bears and rabbits, with fruit trees all around it. It makes me think –family, community but also wild and nature. Dougherty uses the rule of odds and I see the smallest house in the middle as an analogy to kids of the community: small and vulnerable yet protected by the big ones around them.