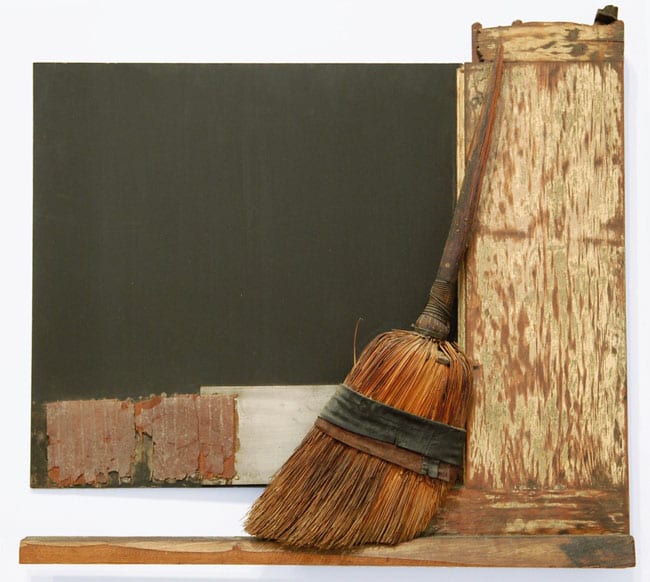 Swept by Dale Brockman Davis 1970
Is a mixed medium which includes a brook, pieces of wood and paper in a frame. this is a 2D artwork with 3D objects. the colors used in this work is mainly earth toned color's such as browns from light to dark, reds, and white. the rule of space is also being used, the broom is off center and is on a slant leaning on a piece of wood. with the warm colors throughout each object and the fact that everything looks used and old it has a sense of unity. all of the objects have a normal scale and proportion. the focal point of this work is the broom and the style is realistic. my objective thought on this piece is largely based on the time it was made. when I look at this work I think about hard working women, poor in particular. judging by how beat up the broom was and the material around it. the broom is so warned down and broken at the top so who ever it belonged to put it to good use. along with research at this time for black Americans the broom had a lot of meaning. to them it was a symbol of marriage or a part of making the marriage official. it goes to show something that may be simple to one person or used for one thing, others may use it for another purpose or place value or meaning to it depending on culture and also time.

America The Beautiful by David Hammons 1968
A 2D print work with primary colors red, blue, and also black and white. this drawring uses organic shapes and the positive space is the image of some sort of person/animal covered in a American flag. the white behind is the negative space. the rule of  odds is  being use because there's only one main subject in this image. this image is mixed with idealized and realistic features. the American flag is realistic but the body is idealized. it seem to be a black man with an animal face. black people may have been seen as animals or not as human just like the image. even though in reality they do not look like that which leads me to my subjective opinion. to me the image shows as an American it shouldn't matter what color you are or how you look. also assuming this is a black person in  the 1960s to be able t wear and represent the flag is an accomplishment no matter how America portrays him.
Posted by Unknown at 8:09 PM