Xu beihong Xu Beihong was born in Yixing on July 19, 1895 and died on Sep 26 1953. He was primarily known for his shuimohua (Chinese ink paintings) of horses and birds and one of the first Chinese artists to articulate the need for artistic expressions that reflected a new modern China at the beginning of the 20th century. He was also regarded as one of the first to create monumental oil paintings with epic Chinese themes - a show of his high proficiency in an essential Western art technique.

The first piece I choose is one of the his shuimohua: “ Running Horse”.it was painted in 1945 and it’s ink paint on the paper.  Xu began studying classic Chinese works and calligraphy with his father when he was six, and Chinese painting when he was nine. He was very good at shuimohua. In this artwork the contrast  between the ink and the blank frame the horse shape and used the thick and heavy ink and the light ink to display texture. The thick ink was used on front hoof and the light ink was used on the back hoof to make the work third dimension. It seems like the horse is running  toward you. 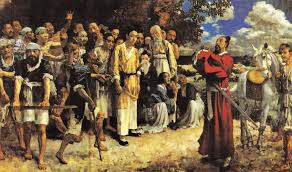 The second one is “Tianheng and Five Hundred men”. It was paint in 1930 .it was painted in oil on canvas. In the right side of the painting the guy in the red and a sword hang on his waist was the famous general in Han Hynasty. He bade farewell to the people who followed him all the time.  As we can see the people seems down in spirits, they all show unhappy faces. I think this painting shows the emotion of  that you don’t wanne say goodbye to someone but you have to.  They don’t look at each other directly, the guy in the red looks directly into sky, it seems like he’s saying sorry , I have to go.

The third work is “Tagore”. I was painted in 1940 and painted on the paper. Obviously in this painting, xu used Western painting methods, but still presented the charm of traditional Chinese painting. The lines draw outline of the Tagore and the face staining combined sketching method. The figure background process traditional Chinese bird and flower painting method to highlight Characters in features.