Art Gets Around
The origins of art date back to the days of cave paintings; since then, it has grown into its many different forms.  In some ways art’s growth is measurable in great amounts, such as the diffence between figure drawings before anyone actually studied the human body and after proportions were discovered.  Art that comes in the form of graffiti, however, is not too different than cave paintings.  As art continues to be discovered and created in new unforeseeable ways, it is evident that certain aspects of art from the past are used in modern art.   Rackstraw Downes’ A Stop on the J Line and Paul Signac’s Evening Calm were painted over 100 years apart and still posses’ qualities that show relation. 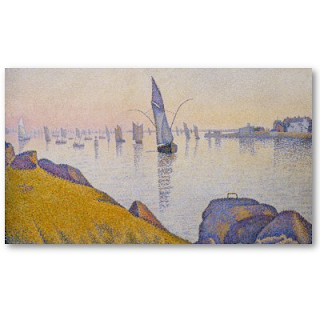 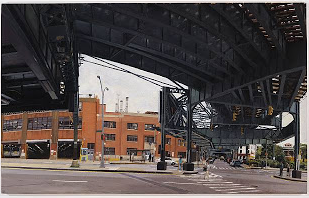 Immediately we are able to notice a similar pallet between the two artists.  Though the styles between the artists are very different, they both find a way to make specific colors pop.  Variations of blues, dark purples, blue-ish greens, in contrast to yellows and oranges, exist in both works.

When you horizontally flip the image of the train (above) , you see that the composition between the two paintings is not too different.  In Signac’s painting the horizon creates a calm feeling.  The warm colors that highlight the boulders on the grassy hill, may even suggest that the sun is setting (Evening Calm).  The assumed vertical line created by the boat’s sail and shadow split the painting in half.  The one point perspective creates a diagonal line that helps indicate motion of the boats, and also move your eye around the canvas.  The contrast between the colors used make the eye focus first on the green area first, since its size occupies the majority of the bottom left quarter.  Signac’s stylistic quality of painting, which was influenced by impressionism, allows the colors to move your eye around the piece.
Downes has a more realistic style to his work, getting all the details in of where light would shine through and on the beams.   While the color technique doesn’t get our eyes moving around this work, the curvature of the overhead tracks are at an askew angle, it creates a more immediate, chaotic sense of motion in comparison to Signac’s diagonal.  The beams holding up the tracks are similar to the vertical lines created by the boat.  The orange in building doesn’t pop in the foreground like Evening Calm, it sits behind the darker greenish blue structure.  The building and the tracks create have more geometric shapes, giving the painting an industrial feel; contrasting from the naturalistic, organic one.  The road and the water take similar shapes, each breaking off into a fork further out in the distance.  Even minor details like the arched branching beams of some sort on the boat are similar to the light post in Downes painting.
Both paintings portray motives of transportation relative to that time period.  Being that I can relate more to the painting done in 2007, I relate certain things to the image: the loud grumbling of a train, the crowdedness of the subway, the hub-bub of the city.   Being that I don’t know what a group of boats may sound like or even exactly what they’re doing, whether they’re carrying goods or people… I don’t know what I should feel like I’m expecting from these boats.  I am offered this beautiful view of golden grass, sparkling water, and a horizon of while sheets- but my other senses cannot relate.  If it’s not the time difference then it is my surrounding environment that makes the difference in interpreting the painting (because someone living in present day Minnesota might know more about boats than trains).
In 1891 France, being so close to the water, probably did use boats and ships as transportation along its coast, but I just see it as just another landscape.  Unless I were to look up what was going on in Concarneau at the time I wouldn’t understand what the message of the painting is.  It’s titled Evening Calm but is that irony (like many artists use in their titles) or was this the time of day that was calm because people were returning home from their long day?  In the same sense, someone from 1891 might not know what a train is or why/how it sits so awkwardly above ground on stilt like support.  Downes painting is showing me my methods of transportation in the city: train, car, feet.   In a hundred more years from now, depending on how technology and transportation (along with art) grow, people may look back on Downes painting with amazement at its structure, it’s massiveness and wonder (because everything seems to be getting compact and faster) how we managed with such inferior mobiles.

CONTEXT (in class): Looking at context is important because what may have appeared to be at one point in time, may not be at another.  People change, views change, people grow, and precise actions end up making more or less sense than previously shown before.  One thing needed to exist prior, in order to evolve or even just show a difference.  Art, like people, like nature, has the potential to change- evolve.  The context of one’s actions at a certain time may be more appropriate or inappropriate and if not in writing or through music- through art, that expression can be shown.  Context gives art its life and tells us it’s story
Posted by LEEN REX at 11:34 AM