My exhibition, "Be Iconic: The Blank Canvas of Pop Culture", consists entirely of art inspired by this single image of Kate Moss: 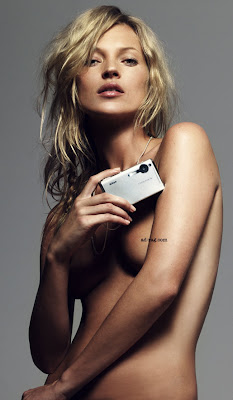 This is arguably one of the most iconic images of the supermodel of all time. While the term "pop art" is most often associated with Andy Warhol, pop art has successfully infiltrated mainstream youth culture, and continues to influence the younger generations as the celebrity obsession grows. Something interesting about the newer wave of pop art is that the chosen mediums are no longer confined to paintings or silk screens - t-shirts, street art, and digital art is just as common as more traditional mediums.

One of the featured pieces is this screen print t-shirt by To The Black Clothing: 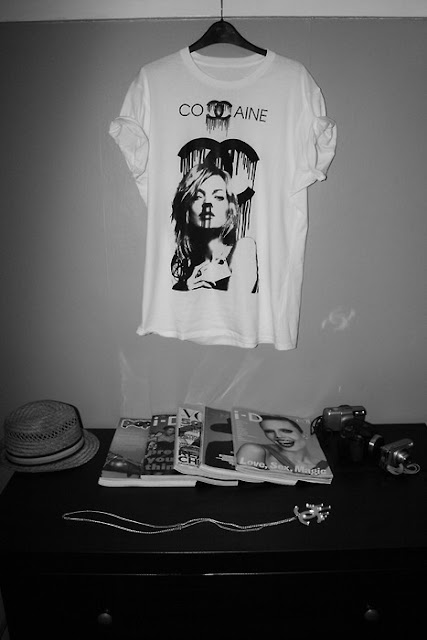 The design parodies both the image of Kate Moss and the iconic Chanel logo. The image of Kate Moss is relatively faithful to the photograph, aside from the blood dripping from her nose - a reference to her infamous cocaine scandal of 2005, an incident that arguably is just as iconic and associated with Moss's name as her photographs. Likewise, the two C's of the Chanel logo are dripping - reminiscent of dripping spray paint, or, in this case, blood.

Another piece featured in the exhibition is an acylic painting by Dominic Joyce (2011). While the medium is traditional, the image is painted in a way that is reminiscent of a computer image that has been too-highly contrasted. While the iconic Kate Moss image has been simplified significantly, the pose and face is still somehow instantly recognizable, and it is clearly a reference to that one specific photo of her. That is what struck me the most about the painting. The image itself is literally nothing more than white, purple, and pink paint with no shading or realism at all. The painting relies solely on contrast, and the organic shapes of Moss's unique face. 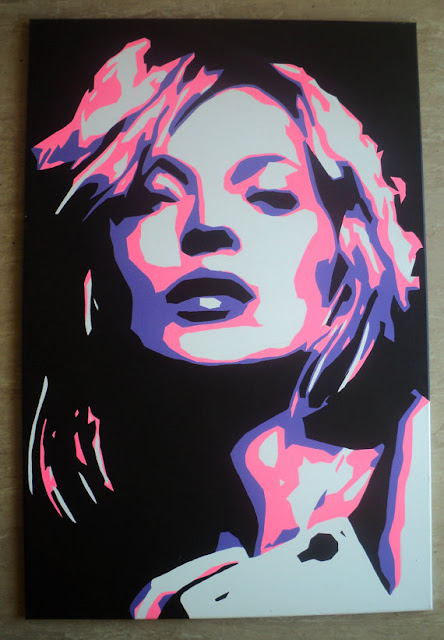 This next piece is by James Mylne. It was drawn entirely in ballpoint pen. 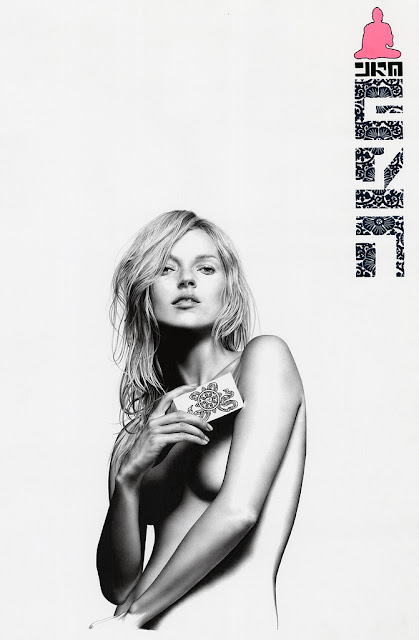 What makes Mylne's work incredible, aside from his unusual medium, is the uncanny realism that it produces. From a distance, it could easily be mistaken for the photograph itself. The concept of creating an almost exact replica of a famous image in nothing more than pen - a common, and unremarkable material to most - is nothing short of amazing, as well as thought provoking. Everyone has doodled on paper corners in ballpoint pen - what is stopping them from taking it to the next level?

This next work featured is a photograph of some British street art, taken by Jayne Russell in 2011. The artist himself is unknown. 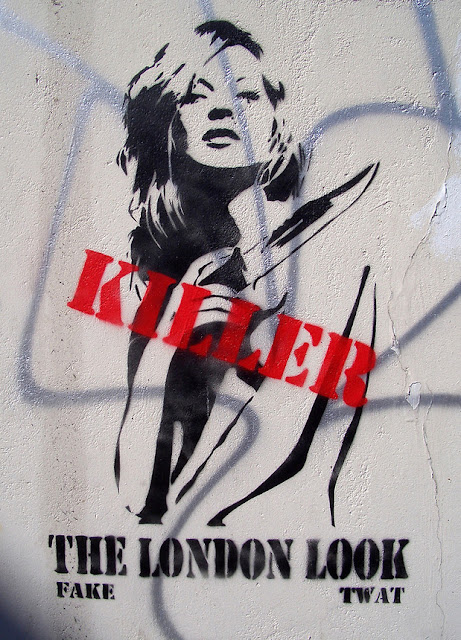 The intended message behind the artwork seems pretty clear. The artist obviously does not care much more Kate Moss, stenciling the words "killer", "fake", and "twat", along with a slogan Moss has repeated countless times, Rimmel London's "Get the London look". While in the original photograph Moss is holding the Canon camera that she was advertising, here she is holding a knife. While this image seems to be portraying Moss as an antagonist, the way she is holding the knife makes it unclear on whether or not she is holding the knife against her own neck. If this is the case, this could be a commentary on Kate Moss's much publicized struggles with drug usage and alcoholism. My guess, however, is that this is not the case, and that the knife is meant to be held to use against someone else. That could possibly be a commentary on Kate Moss's popularization of the "waif", and "heroin chic" aesthetics. Kate Moss is often credited with starting the trend of using super-skinny, often emaciated looking models in high fashion. During the 90's, Moss got a lot of heat for her slenderness, and was often accused of promoting anorexia. Aside from her thinness, she was also accused of glamorizing heroin usage. Grunge-inspired minimalism, under eye circles, half-lidded eyes, and, of course, the constant cigarette in her hand inspired the term "heroin chic". This street art could be a commentary on all this, and on the bad influence Kate Moss might have on young people, especially girls.

This next piece is a print by UK artist Prole: 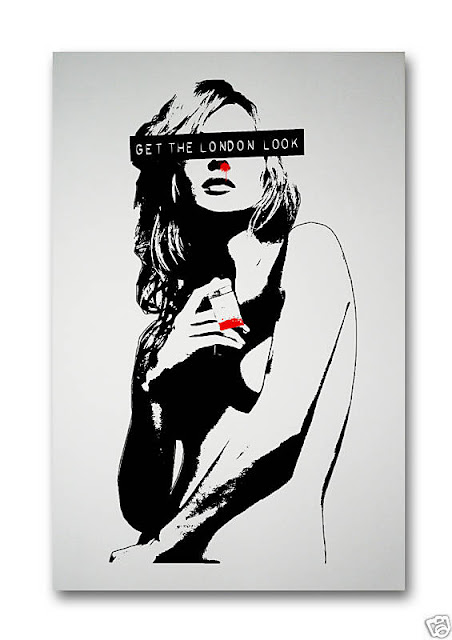 Yet again, there is a variation on what it is Kate is holding in her hand - in this case, it appears to be a baggie of drugs (which are red, for some reason). Her nose is also bleeding, yet another reference to her cocaine scandal.

Next is another photograph of street art by an unknown artist. 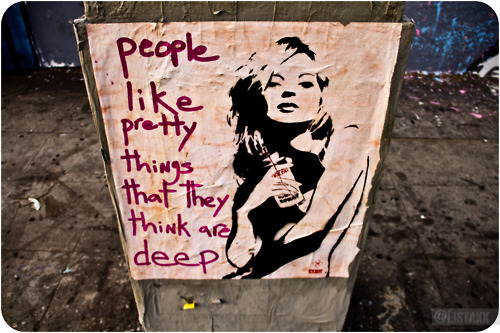 This, I must admit, is a personal favorite of mine. Kate Moss has been a lifelong fascination of mine, and I've often struggled with how to explain just why this is so. This street art reminds me of a quote from Corrine Day, the photographer who discovered Kate Moss, "... while she was clearly youthful, her eyes seemed wise, almost ancient". This is the closest explanation I can find for why Kate Moss - aside from her public persona - is so famous in the modelling world. She doesn't look like just another pretty face. She "seems deep". Her appearance is somehow able to intrigue people. Yet, that's the problem - Kate Moss isn't wise or ancient, that's just part of the aura she give off, and is purely aesthetic. A rather pessimistic argument would be that Kate Moss is simply a variation of the same ole' worship of good looking celebrities. This piece seems to embody that perspective.

The last piece is a photograph of a billboard done by James Cauty. 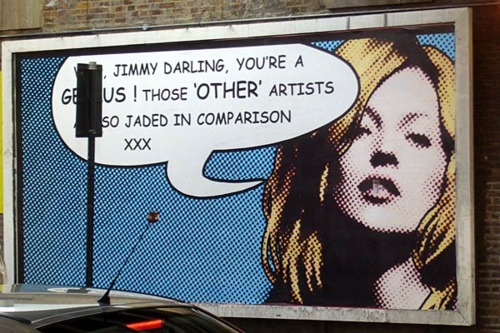 This is a refreshingly light heated work. It's an advertisement for James Cauty, and grabs your attention right off the bat by using an iconic image of a supermodel. It seems to be rather comic art-influenced, with the use of the speech bubble, and the Ben-Day dots.

The themes of this exhibition are the concepts of pop icons as muses, the blank canvas that is a model's photograph, and the feelings and ideas artists project onto popular images. The artwork is to be installed on the walls of the 2nd and up floors of the E, M, and C buildings, where it is mainly classrooms. This exhibition is meant to inspire and motivate students to take a bite out of the action, so to speak, and encourage them to think outside the box and allow themselves to be inspired by whatever it is they like - whether it be supermodels, celebrity culture, TV, actresses, Twilight, 50 Shades of Gray, whatever it is that floats their boat - and use that inspiration to put their own spin on things. The various art styles and mediums are also meant to encourage the young students to not be afraid of developing their own unique styles, in every aspect of life, or in whatever professional field it is that they seek. There is also the theme of becoming "the next big thing", whether that means being the next Kate Moss, the next JK Rowling, etc, etc. There is definitely a feeling of ambition and fame-craving that comes from looking at these images. People should not be ashamed of pop culture. Trashy or not, if you love it, go for it. Be the next Kim Kardashian, or whatever. No harm in trying.
Posted by dollytrail at 12:37 AM