One Love: The Show About Jamaica

All pieces where done by artists who were either born in Jamaica, WI or were influenced by the culture, people or scenery in Jamaica.

This Showcase will make its debut on display in the E Building by the library. 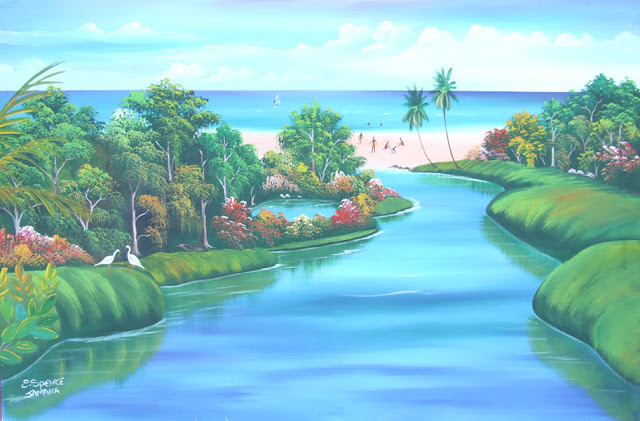 Eldon Spence was born in Falmouth, Jamaica, on the 7th of August 1972.  He always wanted to be an artist and his favorite subjects at school were art & painting, batik leatherwork, and screen printing.  He later joined a group of artists led by Wilfred Black.  By observing them, he developed his own style - and thus rightly describes himself as self-taught.  He is also an acoomplished guitar player and singer, and can often be heard serenading the guests at the Ritz Carlton Hotel in Montego Bay. 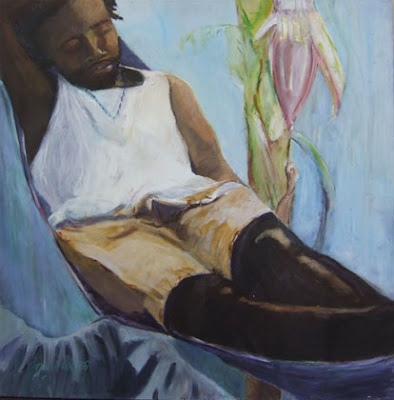 Maria Downes was inspired to paint from the various emotional responses that she has to everyday life; people, landscapes, flowers, patterns, colors, mood and light.  Maria's original works are inspired by her travels to Jamaica, where she has maintained a second residence for many years. 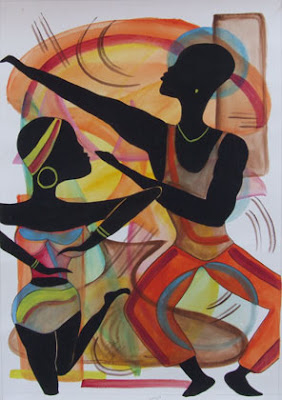 Guggi Palache was born on 1955 in Essen , Germany. Her father teacher and sculptor. She lives with her husband in Jamaica; and has been since 1981. Palache is of Rastafarian faith, but in Jamaican terms she is a Rasta. She's a self taught artist and has been a full time painter since 1981. 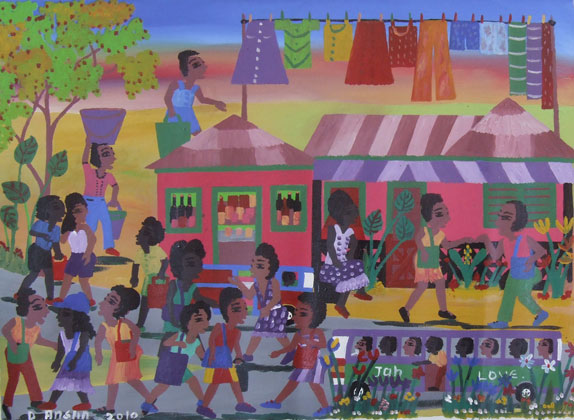 Deloris Anglin is the wife of the internationally known Jamaican painter Albert Artwell, she lives with him in Catadupa, Jamaica.  Deloris' whimsical depictions of everyday Jamaican life are full of the color, vibrancy and humor of this beautiful island.

As stated before, the theme of this art show is to feature pieces that were created by artists who were either born in Jamaica or were influenced by its culture, people or scenery. I came up with this idea because I wanted to show artwork from the West Indies. Rather than having pieces from the United States or Europe, featuring pieces from the West Indies seemed to be an interesting idea. The country I chose to feature is Jamaica. Also, to add a personal touch, I was also born in Jamaica, so yes this show is a little bias. However, to add to the reasoning behind my theme, I wanted to show pieces from “home”. This show can also put an end to some of the stereotypes that are associated with Jamaica. One of the post popular stereotype is that everyone in Jamaica smokes marijuana. However, these pieces depict the everyday life in Jamaica. If marijuana was a routine in Jamaica then the artist would have certainly included an aspect of it in their paintings. This art show would also serve to be educational; showing a different side of Jamaica. This art show in effect would show what life is really like in Jamaica.

The first piece that I chose is an “untitled” piece by Eldon Spence. The first thing that stands out in this painting is the color. The artist used a variety of different colors; blues, greens, pinks, yellows and reds to name a few.The artists also used horizontal lines to paint the sky, sand, ocean and waves. This gives the observer a sense of peace and calmness. There is also implied light from the sun that is shining through the clouds. The painting has variety, it has different trees, different plants and colors, there are people on the beach and a boat sailing; this piece really keeps the eye moving. The painting is also very realistic. To me the painting represents a life without worries or stress. The people on the beach are enjoying themselves and enjoying life. The second piece I chose is another “untitled” piece by Fiona Godfrey, this is an oil painting. I think this piece should be called “Fruit from our Loins” reason being is because the tree is growing out from their loins, the bark is intertwined and they’re babies in the leaves. The artist used four distinct colors, which are orange, black, green and brown. The artist used the rule of thirds and the rule of odds. The focal point would be the tree in the center. The artist also used vertical lines, by the facial expressions this is a very serious painting that represents the family bond. There is also a sense of unity in this piece moreover balance. The human bodies also look very realistic. The third piece that I chose is titled “Dreaming” by Maria Downes. The focal point is the man that is sleeping. The artist used diagonal lines to show direction. The piece is also realistic, it is not idealized in any way. For the background the artist used different hues of blue with hints on green. I think painting is saying that relaxing is necessary, especially in New York where everyone is always busy; its always good to just sit back and take a nap.The fourth piece I chose is another “untitled” piece by Guggi Palache. She too used a variety of colors. Palache also used shapes, they are many circles in this piece. The people in this piece are stylized, it could be anyone. There are also many diagonal lines in this piece to express movement. There are horizontal lines to express calmness. In this piece you see what looks like a big radio in the background and the music that’s coming out of it are represented by the colors that are surrounding them. The people in this piece look like they are dancing and enjoying themselves. Dancing is a very big part of Jamaican culture. The final piece that I chose is an “untitled” piece by Deloris Anglin. Like the previous artist, Anglin used a variety of colors; blues, purples, yellows, greens, oranges, browns, and pinks. The people in this piece are stylized. The artist used vertical, and horizontal lines. She also used shapes, squares, rectangles, and circles. This picture represents a typical day, children going to school, people on the bus, women gossiping, people shopping, washing clothes, and being neighborly.