The trip to MoMa Ps1 was astounding! I loved the endless variety display of paintings, and numerous sculptures. MoMa Ps1 projected a contrasting vibe as opposed to The Queens Museum (I got lost multiple of times!). The artwork displayed in this exhibition had a more modern essence, and presented a never-ending diversity of distinctive artworks of individual backgrounds. The main exhibition was entitled "Now Dig This! Art and Black Los Angeles (1960-1980) display. The exotic arrangement emphasized the rich beauty of African American culture of many African American artist who contributed to the creative movement of Southern Los Angeles.

Making a introductory debut as the first artwork of my choice is Suzanne Jackson's "Apparitional Visitation" (1973). This 2D piece is composed of Acrylic wash on canvas. This image shows the entity of a flower, a woman and a flamingo. What may draw the attention of many viewers is the face located in her torso and the outline of a ghost-like figure in the background. As for formal elements, there are primary colors, dominantly red, and several values of red such as pink, flamingo, and deep red intensified in the color. There is a hint of green, used to compliment the use of red. The Rule of Odds is exemplified clearly in this painting. The woman's face seems calm and hardly tense. Apparitional Visitations appears rather pure and illuminated. The name Apparitional Visitation allows me to speculate that maybe Suzanne is trying to imply the visit of an unexpected person. The Iconography appears to be the ghostly figure. One can say that the face embedded in her torso is represented through the ghostly figure as the unexpected visit. It may be a form of communication between Suzanne and a very important person that she has loss in her life or simply someone that she misses. The flamingo and the flower are aspects that are serene to Suzanne and may share a connection between the presented individual. She is somewhat infused with the figure and the face as if she is trying to exemplify the fact that they are one. Overall the painting is very intelligible and spontaneous in choice of implied components, Suzanne uses transplant and very fluorescent colors to imply the innocence of absence to signify that the individual will never be forgotten. 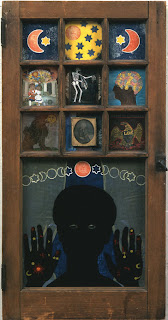 The second piece seemed popular among the class. "Black Girl's Window" (1969) by Betye Saur is a 2D mixed medium piece. With an interesting nocturnal twilight theme, Black Girl's Window is a compilation of organic and geometric shapes. The windows show a variety of subjects that imply a singular emotion for each. There is a silhouette of a young girl, I speculate that the title of the piece is based on the young girls outlook on her window. There is a dominant use of cool and dark midnight colors. There is a subtle hint of repetition in the image of the moon and star, yet the piece has variety of distinctive images provided in the boxes. The young girl in the image may or may not be a representation of Betye, but it is clear that emotion is communicated through her eyes, which seems saddened. This tells me that the images is a symbolization of desires, fears and childhood as seen in the separate images. The topic of childhood is seen in the first box, fear is displayed in the skeleton and desire is represented in the final box, with the term "love" written across. Emotion is also conveyed in the hands, the hands show a sense of surrealism. It tells me that the girl is lacking these components in her life, making her feel incomplete. It may be an outlook on very vital stages on ones life that made it's mark on one's identity.
Posted by Angel Cheng at 3:41 AM