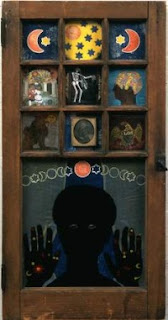 As I was walking around the PS1 museum the first artwork that caught my eyes was “Black Girl’s Window” by Betye Saar. It’s a mixed media assemblage, a painting in a wooden window frame. This artwork features the silhouette of a black girl pressing her hands and face against the window. Above her head there are small openings in the window that reflect different symbols like moon, stars, a skeletons, human brain, a eagle with a word “love” on a shield , a child with mother and someone’s portrait. The colors used in this artwork are mostly dark, such as dark blue, gray and black, but we can also see brighter colors in the small openings like red, blue and yellow. The artwork has both organic and geometric shapes, its form is three dimensional and it has rough wooden frame texture. The focal point in this artwork is the silhouette of a black girl. The wooden frame provides repetition of square openings which gives a symmetrical balance to the artwork. Different symbols in each opening shows variety.  I think Betye Saar artwork tells about her own life, and the black girl in it is her. My subjective though is that she used window to show that looking through it she searched for meaning, thoughts and feelings about the world and each opening holds a different personal symbol. Above the figure and as well in the top panes we can see different phases of moon which may symbolize the passing time. The middle left pane depicts a couple probably her mother, symbolizing love, family and home. In the center pane there is a white skeleton manipulating small black skeleton which I think symbolizes the racism toward the black people. In the middle right pane there is a human brain symbolizing knowledge and thoughts. The eagle with a “love” on a shield, probably symbolizes the love for the country. I like the way she used symbols and window frame in artwork it seemed very interesting. 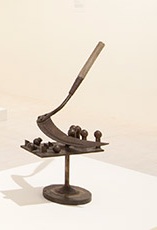 The second artwork that caught my attention was “Panthers” by John Riddle, made from welded metal in 1970. The sculpture depicts a sickle decapitating shapes that appear to represent human heads. The form of this artwork is three dimensional; it has a smooth texture and organic shapes. The sculpture is very simple and balanced; it has only one color brown. The emphasis/focal point is the sickle with the wooden handle which is in full size, scale 1:1. The title suggests reference to the Black Panther party an African-American revolutionary socialist organization active in the United States from 1966 until 1982. The Black Panther Party achieved national and international notoriety through its involvement in the Black Power movement and U.S. politics of the 1960s and 1970s. From the title and description of this sculpture it was very clear that the aggression depicted by this artwork allude to the causalities inflicted on the Black Panther organization by the US government (sickle).
Posted by Daniel K. at 2:08 AM