Recognized for his:
Sculpture, painting, architecture, and poetry 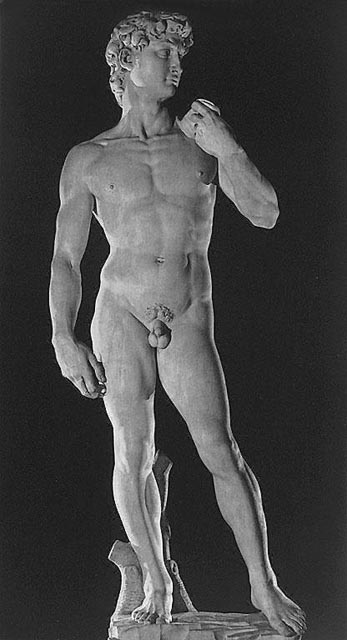 -The high point of Michelangelo's early style is the gigantic (4.34 m/ 14.24 ft) marble David (Accademia, Florence), which he produced between 1501 and 1504, after returning to Florence.
-He used David as a model of heroic courage, in the hope that the Florentines would understand his message.
Objective thought: Michelangelo chose to represent David as an athletic, manly character, very concentrated and ready to fight. The extreme tension is seen in his worried look and in his right hand, holding a stone. The meaning of this David becomes fully clear if we take into consideration the historical circumstances of its creation. Michelangelo was devoted to the Republic, and wanted each citizen to become aware of his responsibilities and commit himself to accomplishing his duty.

Subjective thought: Without knowing anything about Michelanglo, I would've thought he simply created David to represent human and representing humans through David.

Ceiling of the Sistine Chapel 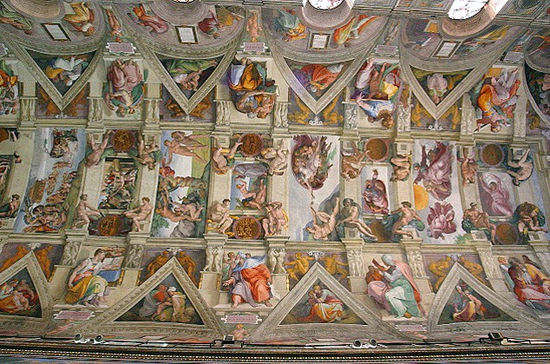 -          It took approximetlly 4 years to paint this. He called other artists to help but he soon fired all of his assistants, removed what had already been painted and, between the end of 1508 and January 1509, recommenced the whole demanding enterprise on his own.
-      he had painted over 300 figures on the ceiling of the Sistine Chapel.
Materials used: Frescoes (A painting done rapidly in watercolor on wet plaster on a wall or ceiling, so that the colors penetrate the plaster and become fixed as it dries).
-Objective thought: The main panels down the center depict scenes from the Book of Genesis, from the Creation, to the Fall, to shortly after Noah's deluge. 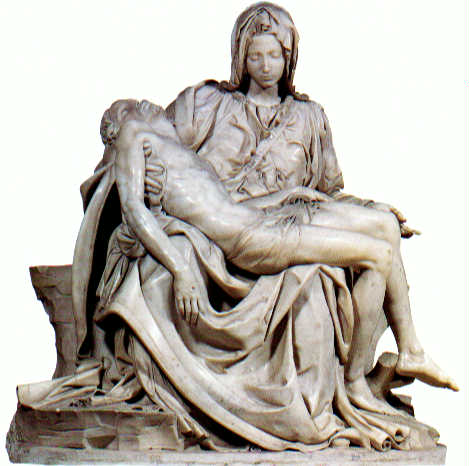 -still in its original place in Saint Peter's Basilica. One of the most famous works of art and was probably finished before he  was 25 years old.
Matierals used: Marble
Objective thought: The youthful Mary is shown seated majestically, holding the dead Christ across her lap, a theme borrowed from northern European art. Instead of revealing extreme grief, Mary is restrained, and her expression is one of resignation.
Subjective thought: Young Mary is carrying the body of dead Christ. She is sadden by the death. By holding him, she isn't giving up on believing in him.
I picked this art work because I like the way Mary's face expression is protrayed as.
Posted by Unknown at 12:11 AM