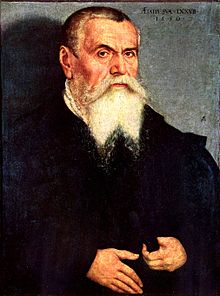 Lucas Cranach (The Elder)
Lucas was a German renaissance painter and print maker in woodcut and engineering. A lot of the work Lucas has done is of naturalistic beings that are completely naked. I assume this is because, during the renaissance period in Europe, people were really getting into having themselves painted; especially royalty, and their infatuation with the human body was starting to grow. Lucas was a court painter for most of his career and is best known for his portraits. Lucas lived a pretty long life from 1472 to 1553 and even after his passing, his son Lucas Cranach (The Younger) as well as others continued his work for decades.
Three art pieces of his that I chose was Cupid, Two Dead Bohemian Wax Wings and Adam & Eve. All three pieces are paintings and have a naturalistic style

Cupid
This baby is standing on a pedestal obviously, possibly posing. He’s holding an arrow in his hand with his hand above his eyes. This could possibly mean that he’s either searching for the next person he’s going to hit or he’s thinking about who he should hit. Awkwardly his left leg is held up, which for me would be uncomfortable and annoying yet he wears a very content and bland look on his face.  This painting is pretty idealized to me; this is the image of what the perfect baby would look like, beautiful blonde hair and rarely any imperfections. The color palate the artist chose to use was very plain and settles and this can be soothing to the eye rather than having bold eye popping colors. And in doing that the artist made cupid look so effortless and gentle that we don’t even mind the fact that he’s naked. I think Lucas chose to draw cupid as a naked infant not only because that is how cupid is usually displayed but also for the fact that love is pure and beautiful and a lot of times you need to put yourself ‘out there’ to find it, and making him completely naked is definitely putting himself ‘out there’. I chose this painting because I am a hopeless romantic and I love the idea of a cupid. Cupid to me is kind of like the fate of love, shooting you and pointing you in the direction of your soul mate. 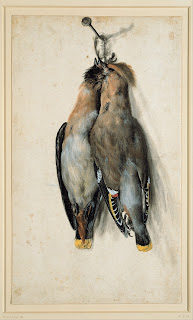 Two Dead Bohemian Birds.
Two birds are tied together on a string handing on by a nail. This color palate is very mellow and simple and I love the pop of red, yellow and white on the bottom of the bird’s wings. This piece is very realistic, you can see their beautiful feathers as if they were right in front of you and the shading gives it depth and dimension. Lately I’ve been watching a lot of Tattooing shows and I’ve learned that people would tattoo dead birds on themselves to represent loved ones who passed away, making me assume that maybe Lucas painted this as a memorial. The fact that there are two birds and both are facing upwards and their beaks toward each other suggest that this could be Lucas’ parents, grandparents or even him and his own wife in the future. I chose this painting because I found the meaning of tattooed dead birds interesting and the art work is very beautiful to me. I love the simplicity of the piece yet can be so captivating. 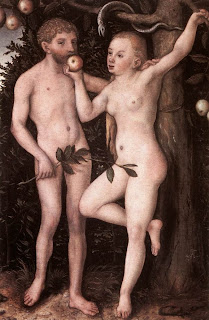 Adam & Eve
Eve is feeding Adam an apple from the apple tree beside them while a snake attempts to take a bite of either the apple or even eve. The apple looks very fresh and not even ripe yet because they’re not even a solid red or green, this could represent new life. Everyone knows what the snack means in the bible, it represents evil or the devil himself and the fact that it’s trying to eat the apple could mean that he’s trying to taint or poison this "new life” that the apple represents.  The scenery Adam and Eve are in is a little weird to me, in the bible, it says that they are in a garden yet in this painting it looks as though they are in a forest or woods even and in the woods you would see more animals than just a snake. Other than that, this piece is idealized to me as well. They have minuscule imperfections and they have beautiful blonde hair again like cupid and look content. I chose this piece because of its irony and how it conflicts with the bible a little bit but still kind of stays true to it.