Zdzislaw Beksinski – Polish painter born in 1929. His style can be described as surrealistic Gothic fantasy. Most of his work is themed around death, decay, post-apocalyptic environments with strange figures and creatures often seeming so real that the one is compelled to look away. He was inspired by music nightmares and probably by war. Despite the grim overtones Beksinski claimed his works were misunderstood, in his opinion, they were rather optimistic or even humorous.  He didn't care about the meaning, he admitted that even he did not know the meaning of his artworks and was uninterested in possible interpretations, that’s why he refused to provide titles for most of his paintings. He once said “I Wish to paint in such a manner as if I were photographing dreams”. In 1998 he suffered a tragic loss of his wife, and a year later he discovered the body of his son, who committed suicide on Christmas Eve. Beksinski never fully recovered from his losses, and in 2005 he was stabbed 17 times and killed by two teenage kids because he refused to loan them money. 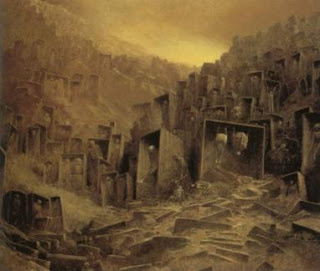 The first thing that strikes me about this painting is the repetition of what I interpret as coffins, there is a variation of sizes and geometric shapes of the coffins , They are all inhabited by different humanoid creatures. Also there are bodies outside as there is an overflow of corpses, it looks like mass grave just above ground, filled with many deformed beings. The lightning and position of the light source give it a very grim and isolated feeling, the light source appears to resemble something like sun, is very distance and a lot of light is blocked by the other coffins, shadows are highly defined. The colors used are very desaturated and mostly a form of brown and yellow making everything look depressing. My subjective thought is that the painting depicts the result of war which is death and mass genocide and was probably inspired by the holocaust. 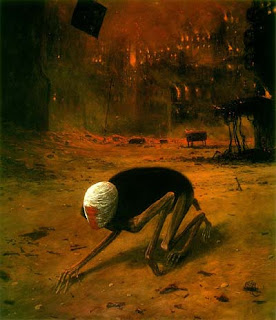 The second piece is titled “crawling death”. It’s oil on wooden board painting. This piece shows a crawling creature, as the title states death, with a bandage around its head bleeding from its eyes, on the background we can see destroyed burning city. The creature is the focal point of this painting. Dominant colors are brown and dark red in different values giving the painting grim look. Shapes are mostly organic except the geometric shaped buildings on the background. My subjective thought about this painting is that there is so much suffering in the world that death itself is already tired and its crawling in pain. 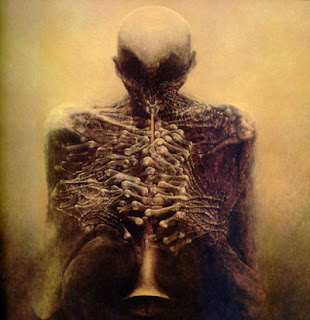 The third piece is also untitled. What amazes me is the incredible amount of detail in this painting. We can see this skeleton like creature playing on trumpet, it looks very creepy. Colors used are again form of brown and yellow making the whole thing look depressing and grim. We can see the value of these colors as they go down they are getting darker. Artist used only organic shapes, positive space is the creature which is also a focal point and negative space is yellow background. I have no idea what’s the message of this piece, probably because there is no meaning in it. Beksinski probably just painted what he saw in his dream an didn't care about the meaning, that’s why I relate to him because I don’t like to think of meaning of an artwork I just prefer to admire the stunning visuals of it. 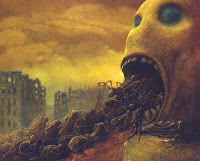 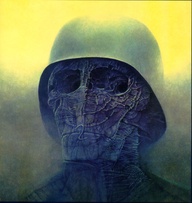 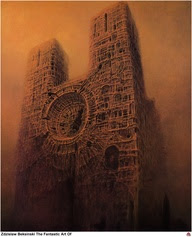 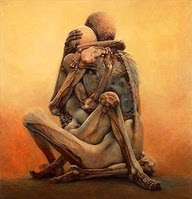