My Artist of choice is Ron Mueck, his style is making realistic sculptures of human life. his pieces are very interesting and different do to the accurate and realistic details in human appearance down to flaws. his work also plays with scale's, so depending on the size and angle your able to experience different feelings and interpretations on each individual art work. even though some may see his art work as creepy or weird it gives you a view of simple or everyday things that happen in life. whether it be something serious as birth and death or as simple as sleeping or on a float in a pool. a lot of his art work are naked people which could imply vulnerabilities in life.  the 3 artworks I chose from this artist is '' Man on the Boat'', ''Wild Man'', and '' Dead Man''. Man on The Boat is a 3D realistic sculpture with organic shapes such as the naked man and the wooden boat. the implied texture is that of  real human skin and rough cracked wood ( the boat). the scale of the boat is fairly realistic but  the man, judging from other pictures with people around it scale is a little smaller then average.the dark brown boat gives the sculpture a  dark old feeling as if this boat has been around for a while. my subjective thought  on this piece is him being on the boat with his hands folded  implies he's been on a long journey and has grown impatient. also by his body posture ( tilted ) and his facial expression it seems as if he's looking at something in curiosity. perhaps he's impatient or tired of waiting to see what is coming for him or where his boat ( life) may lead him. n since he's an older man and his boat is beat up he might of had a rough journey   through life and anything else that might happen wont be a surprise.

Wild Man which is also a 3D realistic sculpture with organic shapes man and wooden chair. implied texture is of a hairy rough man. his scale is very large and the style is realistic. my subjective thought is judging y his facial expression and body posture he is afraid. as he sits on his wooden chair  its like he's being interrogated. knowing that he's wild and hasnt been around a lot of humans people probably showed him fear of not knowing how he would react to them and perceived him as not having regard to human life. but in return it seems as if he is just as afraid as they are. it seems weird to look at a large image of a ma who could use his position to instill fear into others but in fact is the one who's afraid. I guess you can say its the fear of the unknown. 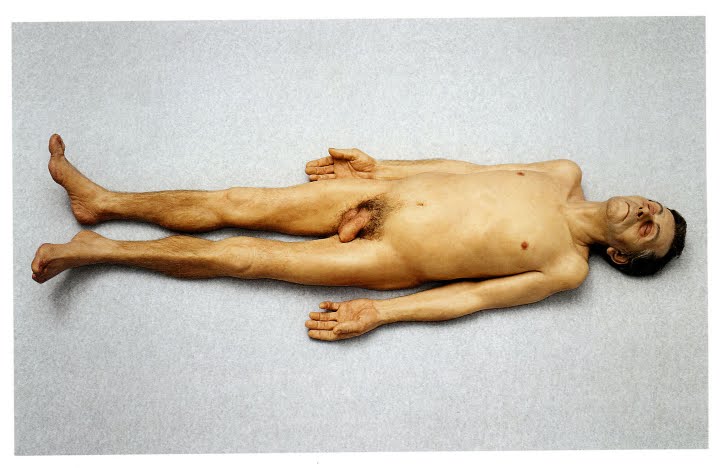 Dead Man  A 3D  realistic sculpture visual implied texture is cold and soft.
subjective thought;
sculpture of a man laying down which happens to be the artist  father in great detail of his actual body. even though its a little disturbing to know he would use his fathers dead body for art work. I also get the sense of how important his art work is to him. this is not just something he does but this is a part of his life as is his father.I think what he wanted people to take away from this is after death the smallest details that is now magnified was irrelevant during life. also once your dead you dont really have a say so in how people treat your body. the take away is while a person is alive take full advantage of little details and connections with loved ones because those memories last for a life time.