"Black Girl's Window" was painted by Betye Sarr in 1969. Sarr used mixed medium. She used geometric shapes on wooden window and organic shapes on moon and symbols on the hands. The color that Sarr used for background was dark colors such as gray and navy blue. The deep values of blue and grey that laid as a backdrop to the silhouettes of skeletons and a human form were hypnotizing. She also used bright and bold colors such as yellow and red for detailing the drawing and highlighting the symbols. However, in Black girl's Window, Sarr colored the main figure, black girl with color black to show that she was an African American. I believed that Sarr particularly painted this figure black to reflect her identity as African American Woman. There was something truly wondrous about the piece and its description. The title states the idea of a window, and just by that there is the urge to look and discover. To accompany that, Sarr  also puts the description of a girl and her ethnicity into our minds as the viewer; by placing this context into our conscious, the audience is encouraged to interpret every fragment of the piece as a narrative. As the feeling of curiosity overwhelmed me, I began to notice that the emotions that this piece evoked would be frighteningly similar as would a young girl as she were to watch events through her window. I feel that this collage of three dimensional objects combined with illustration stands as one of the strongest art pieces with a narrative that I have yet to see. Subtly, the silhouette of the girl stands that the bottom of the window pane as she peers outward to view the world around here. This is a feeling, both as a child and as an adult, that we are familiar with. This aspect to me, is what makes the piece feel close to home and strangely familiar. Our minds feel wired to wonder as a child, which gives us the sense of nostalgia as we reflect upon it as an adult. Moreover, the profile view of human head is used. I think that Saar used human head as symbol as what kind of mood she wanted to set in the artwork. For instance, the human head in the Black Girl's Window, had flowers all over the head. The flower was used to express the feminism of the girl. A window frame is an item we commonly see in life. In Black Girls Window, I believed the window frame gave the painting a clean finish, and it created Sarr's own unique art style. 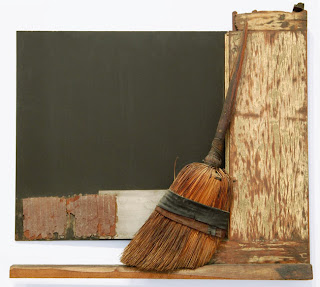 Swept by Dale Brockman Davis in1970 is a mixed medium which includes a broom, pieces of wood and paper in a frame. This is a 2D artwork with 3D objects. The background is painted and a broom is placed leaning against a screen door.  The broom is wooden, with the bristles wrapped with leather. The focal point of this work is the broom and the style is naturalistic. The black wall is the negative space and the broom represents the positive space. In African American culture, brooms are frequently used in weddings ceremonies in a tradition called “jumping the broom”. The custom began during slavery were black people were not allowed in churches, instead a bride and broom will jump together over a broomstick. It is kind of sweeping old life and leaping into new life.
Posted by Naw Su Yin The at 11:20 PM