Biography: Charles white was born in April 2, 1918, in Chicago, died on October 3, 1979. He had 2 marriage in life, first one was Elizabeth Catlett; second one was Frances White: he has one son and one daughter.
Education:
-    He was born into a poor family, but because of his hard work in high school In 1936, white won a scholarship to attend the art institute of Chicago
-    After that White moved to New York in 1942, and studying at the art students league

"wanted poster #6"
Objective: two dimensional art works
-    it has repetition of stars behind the female character.
-    The two color artist use are black and white
-    The focal point is the female on top and child in the bottom
Subjective: I believe the art is about slavery, this is a poster put up by white people to capture runaway slaves. Within this poster we have picture of the slaves, their names and the rewards for their return. 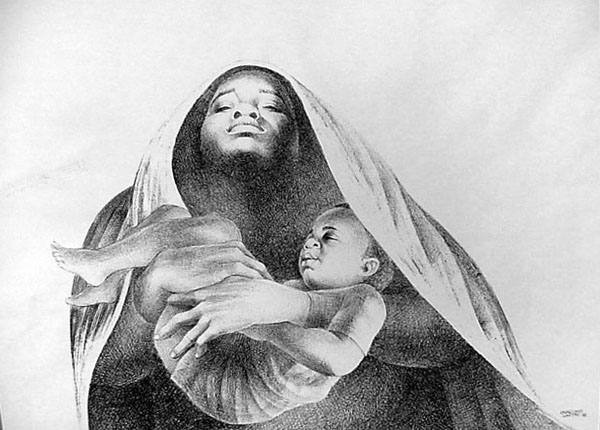 "I Have a Dream"
Objective: two dimensional art works
-    he also use two color black and white
-    the focal point is the man holding a child
-    Which also make them the positive space and the background is the negative space.
-    There is implied light on the face and hands.
Subjective: my opinion for this works primarily comes from the title “I have a dream”. When I hear the title, it bring up my memory of a well know black activist Martin Luther king. So this painting to me is about equal right for blacks in the future, as the child in this painting represents the future.

"The Return of the soldier"
Objective: two dimensional works
-    two color black and white
-    the focal point is the gun pointing at the black soldiers
-    the people in the work positive space and background negative space.
-    There are implied light artist use
-    The artist use a lot of cross-hatching to get the darkest
Subjective: my opinion of this painting is about soldiers returning home from their military service to the south. They are still been treated with segregation and discrimination. Even when the blacks are veterans in American society, the police and the KKK doesn’t really care about them.
﻿
Posted by fenglei at 11:32 PM