The artwork I have chosen to write about is Birmingham Totem (1964). It is ink and charcoal on paper. 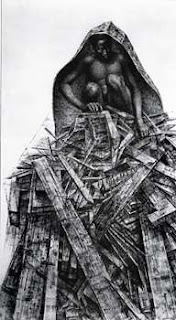 While creating Birmingham Totem in response to the bombing of the 16th street Baptist church in Birmingham, Alabama, on September 15, 1963. The bombing which killed four African American children, was retaliation by the Cahaba Boys, a Ku Klux Klan splinter group, against efforts to register African American voters; The Civil Rights movement, which used the church as a meeting place; and the discussion of integration in Alabama.

The drawing shows a young African American boy, shrouded in a large blanket, sorting through the debris of the bombing. I love the negative and positive space that the artist used to bring more intrigue to the drawing. His use of lights and darks really brings out the drawing. I think it adds intensity to the drawing. I think this is a conceptual art piece and also it is both dry media and liquid media. This drawing shows pain and suffering. It shows that by the boy covered in a blanket and he looks unclothed. Also by the pieces of wood that the boy is looking through makes it seem like a disaster happened. Charles white did a great job bringing the drawing to life and making it pretty easy to understand.

The second artist I chose to write about is Thomas Lanigan-Schmidt.

The artwork I chose is called Lollipop knick knack (let's talk about you). 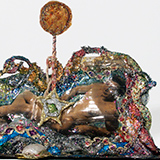 Thomas Lanigan-Schmidt’s mixed-media constructions, collages, and installations are marked by a trashy opulence concocted from household items and dollar stores. Mimicking Byzantine decoration with cellophane, aluminum foil, tinsel and glitter, Lanigan-Schmidt (American, b. 1948) pioneered a maximalist aesthetic in the late 1960s that explored gay sexuality, class struggle, and religion. Mingling high with low, and sacred with profane, Lanigan-Schmidt bucked the reductive tastes of conceptualism and minimalism that dominated his youth, creating a radically decorative practice that, despite its influence, has never been properly assimilated into the history of American art.

Lanigan-Schmidt is a pioneer both in his use of reflective materials (plastic, Mylar, colored foils, chenille stems, staples and all manner of ephemera) and in his unique confluence of aesthetic, religious and secular thought. Which is everything he used to make this art piece. This piece has a naked man with a star where his privates are. It also has a lollipop sticking out by where the star is at. It is a sculpture. The sculpture is 3D and the artist uses alot of variety that provide interest and contrast.He uses a bunch of different colors that are bright and really stand out. I think the focal point of this art work is the lollipop sticking out behind the star that is covering his private part. The lollipop adds alot of emphasis. In my opinion this art piece is really flamboyant.