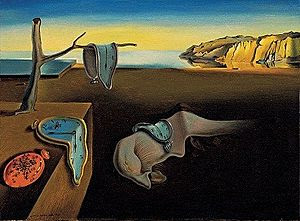 Salvador Dali was born May 11, 1904  and died January 23, 1989. He as an imaginative painter who often created bizarre and attention-grabbing images. He was fascinated with science and mathematics, which can be seen in some of his work.


The Persistence of Memory 1931 - Oil on Canvas
This painting is one of Salvador's well recognized works. Dali wanted to incorporate the idea that time doesn't persist while we dream or sleep, only memories do. This is an abstract piece and
non-representational.  The creature shown is to represent an animal of    some sort that we see in our dream. The creature is drawn this way because at most times, we cant acknowledge the exact animal that we see in our dreams. The clocks shown are to represent that time doesn't exist. While looking toward the bottom left in the orange/red-ish area, there are ants shown. Dali used ants to represent death in his works, which probably suggests that the creature is no longer living. Formal elements used include lines, shapes, and color. Lines that are shown are horizontal, vertical and diagonal. Shapes that are used are organic and geometric. Geometric shapes can be see when looking at the red object, clocks, and the blue rectangle in the background. This shows a mixture of primary and secondary colors. The rule of odds plays a role in this piece when noticing that there are only three clocks. I can relate to this painting because i too have no sense of time while dreaming. 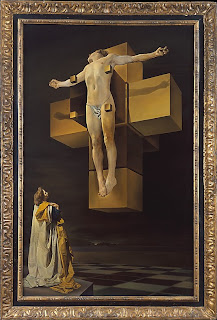 Crucifixion 1954 Oil on Canvas
Dali began taking a different approach when crating the Crucifixion of Christ. Dali had an interest in Catholicism, mathematics and science, forming them together to create this piece. This is a 2D representational piece. In the painting, you will notice that Jesus is hung on a floating cross, held in place by squares instead of nails. You may also notice that his body does show any sign of real torture. Formal elements used are shapes, lines and pattern. Lines drawn are horizontal, diagonal, and vertical. Shapes shown are geometric and organic. The squares on the cross and on the floor take the form of a pattern.What i found interesting about this work was that Dali did something that the others don't. When we think of Jesus, we think of him suffering on the cross after being tortured. Dali challenged that thought by drawing the opposite. 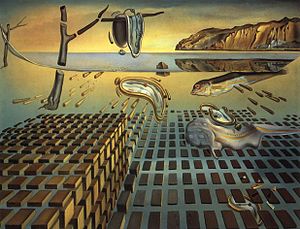 The Disintegration of Persistence of Memory
1954, Oil On Canvas
Dali's Interest in nuclear physics helped him create this painting. The painting was to symbolize the effects of nuclear weaponry. This can be considered a companion to his previous work "The persistence of Memory." Geometric shapes can be found when looking at the rectangles on the ground. Diagonal, horizontal and vertical lines are shown. The rectangles take the form of a pattern. The horn like objects in the sky represents missiles dropping from a plane. Unlike his previous painting, Dali does not use rule of thirds. This time he adds a fourth clock (on the ground). I find this interesting because it shows that time is not a factor in the midst of war.
Posted by Unknown at 11:31 AM