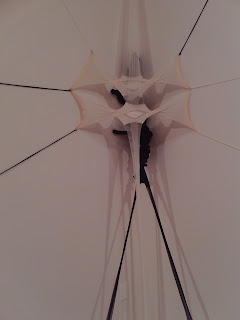 Only Love Saves the DaySenga Nengudi 1943
nylon, sandbags
This 3D work sits quietly in the corner of a room in the museum.  The stretched nylon reaches outward towards the viewer; the elongation allows the material to make distinct lines against the wall and even creates shadows which imply more lines.  The up-right-ness in addition to the extension of the pieces of cloth, made the work look to me, like an abstracted human- a nylon stick figure. Nengudi only uses two colors of nylon; black and white. When first looking at the piece, thoughts of suppression came to mind.  The white piece of nylon hovered over, almost trapped, the black piece.  Looking at it closer (and not noticing the title) the material and the shapes the material formed began to feel like it was suggesting something more sexual.  The center of the piece twists, and stretches the material to create geometric and organic shapes. It may have been the symmetry or the one vertical piece that made the shape in its entirety look like underwear, but it began to resemble sexual organs more and more.  Even the black piece of nylon in the back had a penal structure to it.  The bags of sand that work with the nylon to weigh it down help the viewers eyes work all the way around the piece using the mediums natural weight.  The three bottom strips of nylon in image were weighed down by sandbags and varied in the color of the sandbag itself.  The two white strips held black bags of sand, and the white one in the middle held a black one.  The mixing of the two colors gives off the feeling of integration.  Originally, I was surprised to see nylon being used with such plain colors, because I've usually seen a larger variety of colors used, since nylon can be playful in light or with layers.  It wasn't until after looking at the work as a whole, that I saw how Nengudi did use nylon holding importance to color.  The work is showing us that.  The sharp angles and the overlapping of the two shapes on top of the integration of light and dark, allow the viewer to feel the struggle between the mixing of races sexually while also seeing the beauty of it.  The title Only Love Saves the Day suits this piece because the message that it portrays is that, it’s only through love that we see the beauty in all beings and further create more beautiful beings of mixed entities.


The second piece that caught my eye was :
American Problem Solver (1970s).
John T. Riddle
mixed media
(Unfortunately, I couldn’t find a picture of it.) The mixed media sculpture was of what looked like a giant animated gun pieced together by different pieces of metal.  On top, placed in angles, sits the letters U.S.A in red, blue, and white respectively.  Its exaggerated barrel compartment and narrow curved neck and base, give the piece an animated feel.  Its nostalgic in the sense that it reminds me of The Animaniacs  or Looney Toons, weapons that look large enough to blast something miles away right from its spot. As an American I found it ironic how I could identify what that sculpture was but it took a second or two for the ones around it.   In the 1970's the Vietnam war was going on and I’m sure that many people who felt as though the only way America solves her problems is through violence.  Riddle is expressing his opposition to the war and to violence in this piece.The work itself looks like it could have been an identifiable weapon in any time through America's history; a cannon, a gun, a ray that shoots out demolishing rays of light (to get futuristic). Because of its size and demanding presence, I feel as though even though the weapon seems to be pointed downward, it still looks as though it can be fired and harmful.  The colors of the letters stress the emphasis of our particular use of weapons.  The quilted pieces of metal contrast greatly with the softness, loyalty, and promise of piece associated with those letters and colors.
Posted by LEEN REX at 1:04 PM