Seven Angels: The Start of the Apocalypse

Seven Angels: The Start of the Apocalypse.

Location: Poolside Cafe.  The main reason for this choice is it is the area in which I spend most of my time with my friends when I don't have class, also another reason for them to close down poolside and listen to everyone complain about it.  Actually this topic though would catch a lot of the people I see daily to come in and look around at the art.

With December 21, 2012 approaching, (12/21/12) the worlds ending as of the Mayan calendar, I thought an art show containing art of several possibilities of the way in which humans may become extinct would be a perfect idea.   The Book of Revelations says, it is when the seven angels of anarchy are gathered with the seven vials of destruction will be when the world will finally end.  It's incredibly unlikely though that the world will end on this day, however as it has been said it is the start of the apocalypse.  In total there were seven possible ways the world could end, sun exploding (super nova), natural disaster (earthquake, volcano, tsunami) Asteroid collision, plague (Sickness), Famine/ drought, nuclear winter (man made war), and The dead start walking (Zombie Apocalypse.)  The reason I chose this theme was because I have always found an interest in the end of everything.  Most of my writings are about the end of the world, and my signature is including one of the seven angels of anarchy in each story.  The start of the apocalypse comes from the order of god, so with that each work in today's show will contain angels preparing the end, or views of what the end will look like

Fallen Angel, Artist unknown
This work is of an angel falling from grace crashing into earth at a not so great time.  this picture is a resemblance of time that god did not create the perfect universe he wanted to.  Nothing remains perfect, even angels tend to fall. 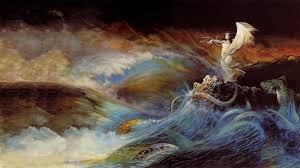 Angel of water - Artist unknown
The angel of water has been the most predicted way the world would end.  With the polar ice caps melting, and sea levels rising, it wouldn't be a shock that if the world drowned this is how we all went out.  I chose this painting because I it fit right into the apocalyptic scene i am trying to create.

Joe Maniscalco - Seven Angels of Revelation
This would be the main piece of art shown in the show.  This painting shows the seven angels I had mentioned before each unloading their powers onto the earth.  the lower half of the painting has humans of all sorts, rich and poor, suffering in the end.  Each angel happens to be opening their Vials of destruction, as seen there are the seven angels, and the several different possibilities of the end.

This picture is of a war that has broken out in London, where the world seems to be coming to an end.  the lava pits in the back show the war humans were fighting to resemble a type of hell they went through to get there, of the seven seals the one scientists say are the most likely to happen to us is our own demise would be a man made war.

Post Apocalyptic City - unknown artist
Does this picture look familiar?  A distant land not so far from us, only crossing a small river into Manhattan. had Manhattan island been hit with something devastating like a bomb.  The destruction here is what the world would look like with minimal to no survivors if the world were to enter a nuclear war.
Posted by Unknown at 4:33 PM