"The Wine Leading the Wine" and "American Dream" 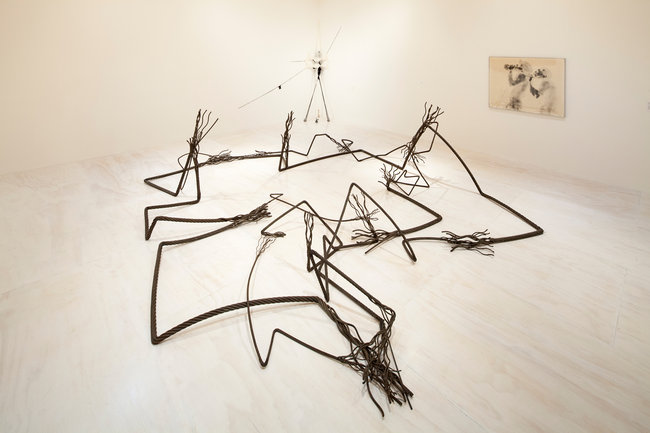 "The Wine Leading the Wine" by David Hammons is a 3-D piece. It is made of various materials including wire and glass from wine bottles. The most striking element of this piece is its use of lines - the piece itself takes the form of a long, twisted, imperfect line. Since the ends of the line are connected, it is technically some kind of geometric shape. I can only imagine the texture, since we aren't allowed to touch it, but I think the texture is strongly implied anyhow by the materials used and the "frayed" parts of the structure. It looks dangerous and sharp and foreboding, and not something one would want to touch. I think that the artist must have painted over the structure in dark paint, considering the variety of materials used, in which case the dark color must be intentional, most likely to make the structure even more dirty looking and foreboding. The overall effect is very striking - it doesn't look like its materials, it looks like an alien, black sludge. The title is apparently a variation of the phrase "the blind leading the blind". This, paired with the piece's connection to African American social commentary, makes the meaning quite clear in my opinion. The structure is the embodiment of the corruption and brainwashing that leads to the kind of journey African Americans have faced in their quest for social and political equality. The racism that has caused the kinds of issues African Americans have faced is something that has been frustratingly hard to end. Throughout the past century, the American population has slowly made the progress necessary to stop the cycle of racism - not just inside people's heads, but within our government and social constructs. If I were to put myself in the shoes of an African American in L.A. during the 70's, I would be impatient as hell for justice. The 70's I think were a very interesting time period - there was so much change and revolution going on, not just among African Americans, but also women and the feminist movement. Yet, at the same time, the majority of America was still ignorant to many of these issues and continued to be guilty of things like racism and sexism. I think this piece conveys what it is like to watch your country continue to be trapped in its ancient cycle of inequality.

The large black section of the painting with the newspaper clipping signifies to me the mass of African Americans - or Americans in general - who were promised the American Dream, and who tried to achieve it. The red line to me marks the American Dream. The space below the red line is very small. The message overall seems to me to be that African Americans, during a time when things like slavery and Jim Crow laws were behind them and they were almost comparable to White American citizens, started facing a different side of racism. That is, the problems that come with being a discriminated against population in the modern world, where people aim to be successful and educated and wealthy.