I thought it was best to use this as my first piece for the exhibition. The reason being for this is because as men go to war, they leave their entire lives behind in order to protect the country that they love. They take on a major responsibility and job to keep the country safe and protect other ones as well. As we see our soldiers put their lives on the line, we could only imagine what their mind goes through. The reason why i liked this picture was because I felt that it addressed this issue. We never actually understand the emotional pain and suffering that these soldiers go through in the midst of war. As you can notice in the picture, there is only one soldier facing the other way. I feel that the soldier began to remember the memories of his loved ones, and developed a sign of regret for being a part of the army. I like this because we could only assume of what the soldier is actually thinking. The painting shows a great deal of formal elements such as lines, shapes, and unity. Lines shown are mostly vertical. Vertical lines reveal strength and are assertive. What I found interesting was that the line used for the soldiers gun that has his head turned around, is not vertical, but yet it is diagonal. What I'm guessing is that he is not a strong soldier, or his feelings have affected his performance as a soldier. Shapes used are geometric and generic.  Also the combined soldiers walking in the same path show unity. 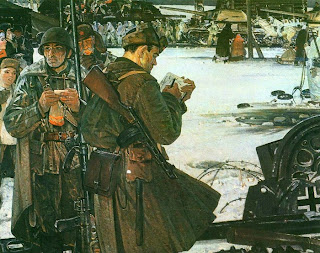 This second painting reveals a soldier writing in a note pad while other soldiers catch their eye on something else. What I believe is happening is that the soldier wants to take time to record his experiences in his notes. I feel that this is his way of "blowing off steam" or expressing himself since there really aren’t a lot of people that he could talk to about his feelings. He might have a way of bottling things up until his pen meets the surface of a piece of paper. This painting shows a great deal of formal elements such as lines and shapes. Lines used are vertical, horizontal, and diagonal. For example the soldiers gun takes the form of a vertical line revealing that the gun shows strength or in other words, makes the soldier stronger. Shapes, which are used, are geometric and generic. For example, bags on the soldiers waste take the of a square or rectangle. 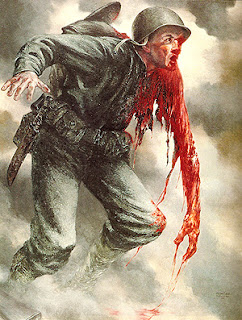 After the emotional stress happens, many soldiers pay "The Price." Soldiers put their lives on the line, which means that there is high chance that something may go wrong. This piece shows how dangerous war can get. Soldiers may become dismembered, have their body part mutilated, or have other damages to their bodies. I believe that a grenade thrown by an enemy soldier injured the soldier. This act left his arm shredded after impact. This painting shows some formal elements such as lines and shapes. The lines that are I could make out were diagonal. Shapes that were used were geometric. The soldier’s helmet reveals a geometric shape by taking on the form of a sphere or circle. Also the soldier would be positive space while the background would be negative space. 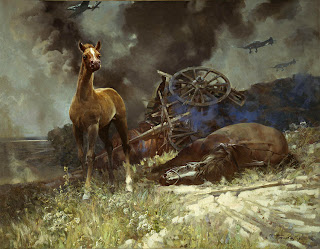 This next piece shows that even the innocent falls in battle. When we think of horses, we think of innocent, beautiful creatures that people couldn't stand to hurt. As we look in the painting, we notice that even the good has a small chance on surviving through the war without at least something happening. What I believe happened was that enemy soldiers ambushed a carriage caused the death of one horse. Many formal elements can be found in this painting such as lines, shapes and pattern. Lines, which are shown, are diagonal. Shapes included are geometric as well generic. The wheel on the carriage reveals a geometric shape by taking on the form of a circle. Pattern can be seen when looking in the grass. What i found interesting was that even though one horse appears to be dead, the other stands tall right beside it, which leads me to think of unity. 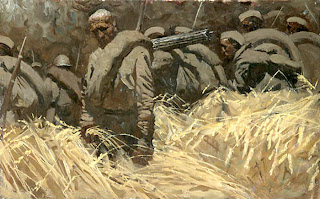 Emotional stress has a major impact on soldier’s performance throughout war. While in battle, soldiers suffer from witnessing deaths of their friends or even coming face to face with death. With the long travels, heart broken memories of the people that they loved, and the constant thought of tomorrow not being promised affects the soldiers drastically. I believe that this painting addresses that issue. As we look at the painting, we notice that the man does not have a pleasing look on his face. I feel that his face is painted with suffering and hard times that he had went through throughout battle. The life he used to know is nothing more than a distant memory and where he was was his new life. Formal elements that can be seen in this painting are lines and shapes. Shapes used are geometric and generic while the lines used were vertical and diagonal.  What i found interesting was that this relates to first picture that I chose because once again it shows a soldier who has his face turned toward something other than what the others are focused on. As we look at his gun and compare it to others, we can notice that the lines used on his gun reveals a diagonal line. By observing this, I was able come to the conclusion that his feelings and emotions have affected his performance.