"Spirit of the Carnival" and "Large Moses" 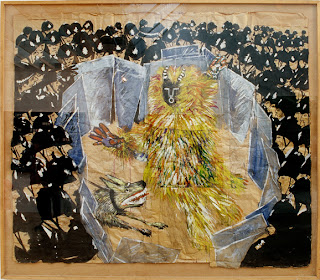 My favorite painting from our class trip to the Queens Museum of Art was said to be the most famous painting of British painter Tam Joseph. The painting is entitled "Spirit of the Carnival" and it was painted in 1982 by pairing acrylic and paper together. The meaning behind this piece of work comes stems from the British law officials who tried to contain the focal point of the painting, which is that of an ancient African spirit. Tam Joseph refers to the spirit as the Masquerader. He stated that this painting represented how the British ruled various regions of the Caribbean, and how evan though the minority races adapted to British customs, there opinion and presence  still was contained.
The Visual Elements that I can pin point include lines that show movement, it's shape is 2D and organic, the colors used are shades of blue, yellow, and orange, which make the Masquerader come to life. The Seven Principles of Design indicate that various colors were used as well as the element of balance when referring to the British law officials surrounded the spirit. 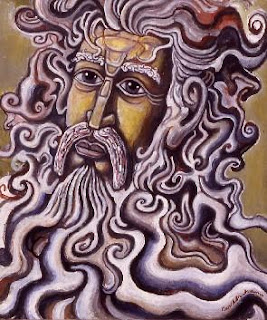 The second painting that I liked came courtesy of a Jamaican painter by the name of Carl Abrahams. He is cited for being a very influential religious painter that created such pieces like "Large Moses" during the 1950's. I like this depiction of Moses because if I had to put a face to him, this painting would be spot on. As opposed to the previous paintings, this painting uses more of the Visual Elements, which include the use of lines, light value and color. The Seven Principles of Design that are displayed are the visual repetition of the lines that distinguish Moses's hair and beard, approximate symmetry that is displayed on his face, which is also where the emphasis is put on. All in all, I enjoyed our trip to the museum because I've never been there before, nor have I been near City Field, and most importantly, I enjoy paintings that are painted by Caribbean artists as well as paintings that represent the people, places, and culture of my mom and my immediate family.
Posted by Erika381 at 9:48 PM